Classroom debates require students to exercise their critical thinking skills, analyze different opinions, and logically present their arguments to their peers and teacher. Although writing persuasive essays necessitates logical, creative, and critical thinking, an oral defense of one’s opinion is an ever-evolving learning exercise. Oral debates do more for students than static prompt-response assignments. Teaching students to think on their feet, quickly create counterarguments, and disprove a dissenting opinion before a forum of peers removes the training wheels of drafting and editing arguments which writing allows. Research by Kuhn and Powell (2011) illustrates that students’ debate skill sets carry over into their writing, resulting in stronger evidence and more well-written arguments. Integrative perspective, a term coined by Kuhn and Powell (2011), to describe dual-perspective thinking and arguments, is more prominent in students’ essays who have been exposed to debate training.

Strategy
Post-It Poll and Debate is a teaching strategy in which students write their names and summarize their debate evidence or opinions on a Post-It Note. Then, students adhere their Post-It Notes to signs stating contrasting opinions located on different ends of the board. Students then work to move their opponents’ Post-It Notes to their opinion’s side by effectively arguing and changing their classmates’ opinions and thus, Post-It Note position.

Post-It Polls can be messy.

In a technology-driven classroom, Post-It Notes, paper signs, and chalkboards can be replaced by Padlet, a synchronous online sticky note tool. With online sticky notes, or Padlet posts, debate can be stimulated by the teacher and evidence can be countered by students who can view every students’ opinion projected from the teacher’s computer screen in real time, or with a quick refresh, each student’s device. Students position their Padlet post with three pieces of evidence or three reasons why they support their respective side under a tag stating a debate opinion using their web browser. The teacher plays the role of devil’s advocate and spurs debate and conversation, stating opinions or calling on students based on their opinion summaries. Students can use their classmates’ responses as well as the summaries of students’ evidence and opinions projected on the board to craft counterpoints. As the debate takes place, students can move their Padlet responses to the other opinion’s side as their minds change. The teacher and students can follow the shifts in opinion synchronously via either the teacher’s projected Padlet screen or each student’s device’s screen. 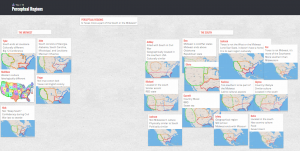 Padlet offers a much cleaner, waste-less, and responsive alternative.

Implementation
Controversial Topic Debate: Teachers can post a prompt in Padlet that deals with a controversial classroom topic (i.e. a governmental debate, controversial law, ongoing literary controversy, etc.). Students will summarize three reasons why they support one side of the debate or the other citing evidence and post their ideas on Padlet, situated under either side’s header. The teacher will then introduce the controversial topic, playing devil’s advocate when needed to stir the pot. Students will use their classmates’ responses and the summaries projected on Padlet under each respective side to disprove evidence, craft counterpoints, and retort to other students.

Ethics Debate: Teachers can encourage students to examine right and wrong and opinions about the greater good by introducing a hypothetical situation that students would consider appropriate or inappropriate (i.e. “Is it acceptable to steal?”). Students will post their names and their reasons to either the yes or no side of the Padlet workspace. Next, the teacher will modify the situation (i.e. “Is it acceptable to steal to feed your starving family?” etc.). As the teacher adds layers to the ethical question, students will change which side their Padlet post is on. Every round, the teacher will ask students their opinions, and ask students who changed their opinions what made those students change their minds?